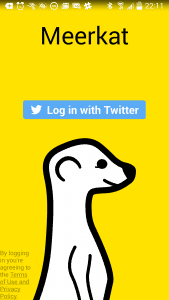 Live Video Streaming is set to become the hottest social media property during 2015, two apps namely Meerkat and Periscope have emerged as the frontrunners thus far but other apps like Livestream, Ustream and Stringwire have also gained good traction in the market.

Meerkat is currently available on iPhone, iPad and Android. Periscope has been available on iPhone for some time and the Android app has only recently been released and seems to only work efficiently on later model Android phones. Of the two we believe Periscope is the one to watch now that the Android app has been released, Periscope is owned by Twitter and has better and more functionality. Both apps require Twitter accounts to run.

When you look at the search feature of Periscope it becomes clear that it is a Twitter app. The ability to discover new accounts is what makes Periscope stand out here, as it is vitally important that followers can find you by a logo, bio or similar accounts. People want to know what you do and who you are.

Some of the current functionalities of Periscope are:

Live video streams can be viewed online as well as in the app.

Email streams can be sent to friends using the web link provided.

Your video stream is available to view afterwards.

A private broadcast is available and not moderated.

You can turn off comments.

After listening to some of the tech show broadcasts on the Periscope platform it is clear that it is still everyone’s guess as to which direction this platform will go. Many options come to mind, for instance, bands giving sneak previews of new songs to get listener feedback, advertisers doing factory tours, live video webinars. Elen Degeneres is already a big name on the platform and uses it for behind the scenes broadcast of her shows.

Meerkat will have some work to do if it wants to catch up, so download Periscope and give it a try.

Start your own channel, do a broadcast and let us know so we can follow you.

Subscribe to Our Newsletter and Be the First to Know!